Members have the opportunity to show their support by donating $15 (or more, if you are so inclined) and receive the “#BlueFamily” pack (t-shirt, pin, & rubber bracelet). Proceeds from this campaign will be divided equally among two organizations that benefit Harris County’s Law Enforcement. Snap pictures and upload them to our social media pages with #BlueFamily & #HCFCUcares for a chance at a prize.

The t-shirts design includes the Thin Blue Line, a symbol used by law enforcement, originating in the United Kingdom but now prevalent in the United States and Canada to commemorate fallen officers and to symbolize the relationship of the police in the community as the protectors of the citizenry from criminal elements. The t-shirt also includes the phrase “Nemo Me Impune Lacessit”, the motto of Scotland, meaning no one attacks me with impunity. This motto has been adopted in the United States by law enforcement officers. It’s used by police to cover their badges when mourning a deceased officer. The Houston Police Department stated they wear this motto across their badges to remind others that they stand together in protecting citizens and to remind themselves that they have each other. It is also seen on officers’ vehicles in and around the downtown area.

Let’s work together to make this campaign viral & show our support for law enforcement by donating or purchasing a #BlueFamily pack. Donations can be made in cash at the credit union teller line.

Online purchase options are available for our members only through account deduction. 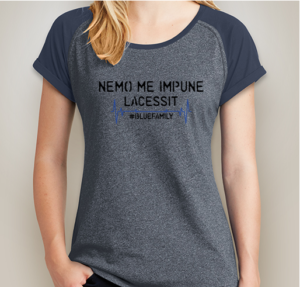 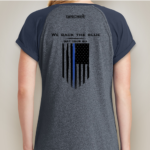 The minimum donation is $10 to receive a t-shirt, $15 to receive a gaiter/face covering. Includes T-Shirt, Thin Blue Line Pin, & rubber Thin Blue Line Bracelet; T-shirts are a Heritage Blend T-shirt that fits 'true to size' & gaiter is one size. Items are not guaranteed until payment processes.